Great things are made by everyday people for the love of their community.

I recently received a group of photographs that blew my socks of a few weeks back. I am always astounded at the way great things can be made by everyday people for the love of their community.

There is an old saying ‘if you think its expensive to hire a professional, wait until you’ve hired an amateur’. This really got me thinking about the self proclaimed status of the professional, and how they see amateurs.

Its interesting how professionals, like most professionals, tend to emphasize the differences between themselves and others. Yet, I think something is lost when people specialise; professionalism is often the death of intellectual inquiry, through over thinking. The word amateur is literally “lover,” it’s from amore, so what better than to do something special just because you love it.

Philip Jones is of these incredible people, doing something great for his community, doing something special just because he loves it. Phillip has sent me a set of remarkable aerial photographs of Sandfields Pumping Station, taken recently on a flight past Lichfield. Phillip is a volunteer at the Abbey Pumping Station (APS) in Leicester, he tells me about himself; 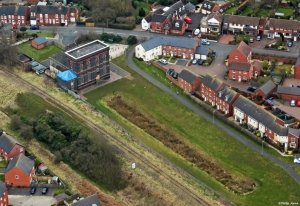 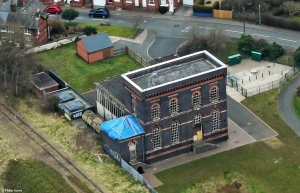 A few years ago I decided to volunteer at the Abbey Pumping Station (APS) in Leicester and I haven’t really looked back since. I visited the museum when I was very young with my parents and I never thought that twenty odd years later I would be running and maintaining the mighty beam engines for the benefit of the general public. I’ve done a bit of research on the engines at APS since becoming a volunteer as I have always had a keen interest for stationary steam engines. I also collect toy and model steam engines as well. Along with my volunteering, I do visit other pumping stations on my travels and have built up a good working relationship with the Claymills Pumping Engines Trust in Burton upon Trent, plus I keep in contact with several of the engine drivers at Papplewick Pumping Station in Nottingham.

I’m also interested in wildlife (particularly anything vulpine related) and one of my other hobbies beside steam is wildlife photography. A very recent pastime has been flying, in 2014 I had trial lesson as a Birthday gift with the Leicestershire Aero Club and I enjoyed it so much, I decided to become a member and have lessons with a view to becoming a private pilot. Given my love of stationary steam engines, photography and flying, it was only natural that I would take the opportunity to combine the three and take some aerial photos of nearby pumping stations. I still have a long way to go before getting my private pilot’s licence but the photographic trips have been very beneficial, not only to the sites I have photographed, but also to myself since I have had some experience of navigation early in my flying training.

If you would like to see some of my wildlife photos and photos of my model steam engine collection they can be found on my website link :

The photograph below is me at the controls of one of the beam engines at Abbey Pumping Station; this was during the landmark event of June last year when we steamed all four Gimson beam engines simultaneously, a tremendous achievement for all involved.

The second photo is me standing next to one of the Leicestershire Aero Club’s aircraft, a Cessna 172. 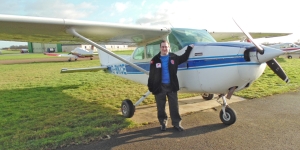 Historian – Photographer – Filmmaker Retired construction professional with a passion for public, social and industrial history. I believe in equality, dignity and integrity for all. Don’t like people who try to belittle the ambitions of others. I am of the opinion that my now life belongs to the whole community and as long as I live, it is my privilege to do for it whatever I can. I want to be thoroughly used up when I die, for the harder I work the more I live.
View all posts by morturn →
This entry was posted in Sandfields Pumping Station and tagged Sandfields Pumping Station. Bookmark the permalink.